In 2008 at the 1st World Conference of Women;s Shelters in Edmonton Canada, a group of conference participants had a strong conviction that we needed an international entity to represent our voices.  The conference was followed with a meeting in Ottawa the next year. There was representation from all the continents of the world. At that meeting we established what is now the Global Network of Women’s Shelters. Participants agreed on the vison, aim and core values. Participants also agreed on the need for a voice for shelters and for women and their children in the international arena.  Shelters have been ignored for too long in the discussions about prevention and elimination of Violence Against Women. As a lot of our work is done in safe, secret places, it was important to unite globally to become more visible and speak with a global voice. We began talking about our experiences, exchanging knowlegde and expertise from different parts of the world. And we still do…

At the 3rd World Conference two more networks joined GNWS: the MENA region (Middle East and North Africa) and the Network of First Nation Women’s Shelters. All of our chairs of the regions/continents took back home the Call for Action –  adopted at the Conference-  with contributions from each region/continent.

In between we developed our vision, purpose, goals and the (member’s) aspiration for the organization we would become in the near future.  Initially, we gathered in Ottawa to discuss vision, purpose and future structure. We followed with a meeting in New York to solidify our vision and to present the Global Network of Women’s Shelters at a meeting during the Meeting of the Commission of the Status of Women, providing an update on shelter work and the women and children we serve.
In 2010 at our meeting in Amsterdam we worked on a future membership organization.

In 2015 the GNWS-Foundation was founded in the Hague, with the support of the municipality of The Hague. It is a small office and the work is done by volunteers and active members of the Global Network all over the world. More information about our continental and regional networks can be found at Join Us 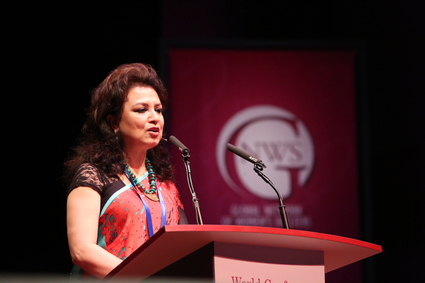 An equal world where women and their children live free from violence.

To unite the women’s shelter movement globally to end violence against women and their children.